Is America a Democracy?

Fortunately for all of us, they are wrong.  Democracy is one of the most dangerous forms of government:

“Remember, democracy never lasts long. It soon wastes, exhausts, and murders itself. There never was a democracy yet that did not commit suicide.”  - John Adams

down a revolutionary minority”.  - Walter Lippmann

“The tendency of democracies is, in all things, to  mediocrity.”   - James Fenimore Cooper

“A modern democracy is a tyranny whose borders are undefined; one discovers how far one can go only by traveling in a straight line until one is stopped.” – Normal Mailer

"A democracy is a volcano which conceals the fiery materials of its own destruction. These will produce an eruption and carry desolation in their way." – Fisher Ames

"Real liberty is neither found in despotism or the extremes of democracy, but in moderate governments."  – Alexander Hamilton

“Between a balanced republic and a democracy, the difference is like that between order and chaos.”  – John Marshall

“Democracies have ever been spectacles of turbulence and contention; have ever been found incompatible with personal security or the rights of property; and have in general been as short in their lives as they have been violent in their deaths." – James Madison

“The experience of all former ages had shown that of all human governments, democracy was the most unstable, fluctuating and short-lived. – John Quincy Adams

“Democracy is four wolves and a lamb voting on what to have for lunch.” – Ambrose Bierce

The Encyclopaedia Britannica states that “Democracy is a system of government in which laws, policies, leadership, and major undertakings of a state or other polity are directly or indirectly decided by the “people,” a group historically constituted by only a minority of the population.”

Absent these components, democracies can quickly deteriorate into mob rule.  Mob rule, as history informs us, usually leads to despotism. The French Revolution is but one example.

Imagine, then, the United States as a democracy.  There would be nothing to prevent the southern states from seceding and forming their own nation – though many would argue that they had that right under our Constitution.

Without the Constitution our economic activity would be mostly localized, since there would be no unifying law specifying the nature of relations between the various States.  There would (and some would applaud this) no central bank, no central Treasury, and no common currency acceptable in all corners of the nation.  Economic progress would be greatly impeded in their absence.

The importance of being self-governing

There is more.  Our Constitution neithers proscribes nor endorses certain behaviors including religious observance.  In factr, the Constitution makes no mention (unlike the Declaration of Independence) of God, Nature’s God, or divine Providence.  Many people do not understand why this is.  After all, wasn’t America intended to be a Christian nation? 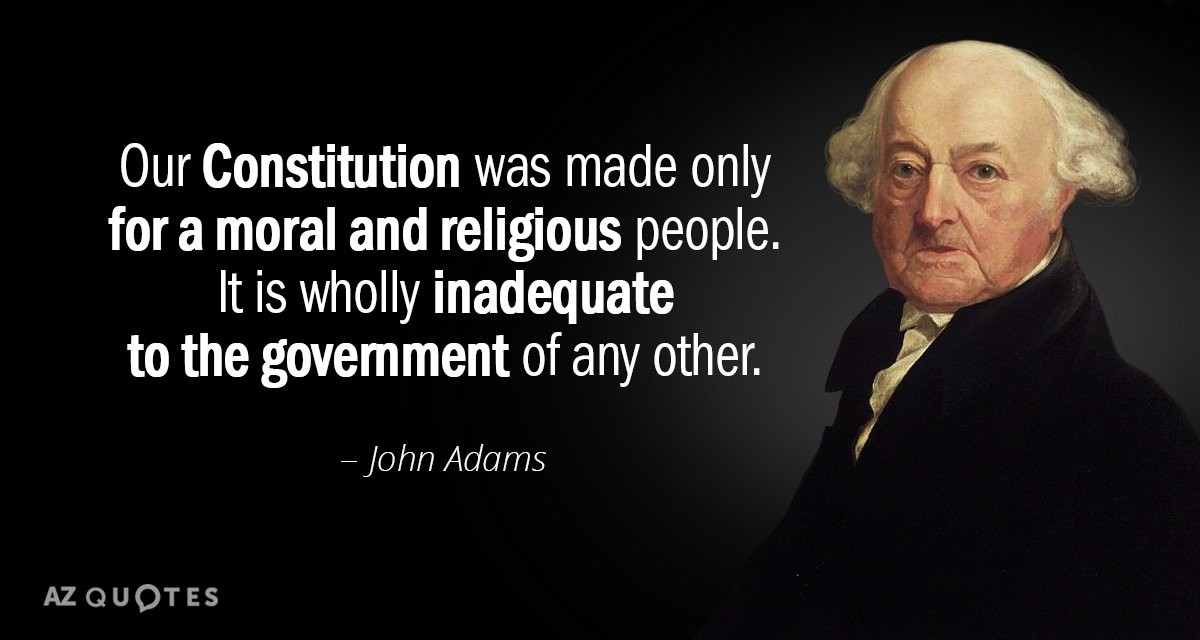 Our Founding Fathers, including John Adams, wisely omitted the mention of God in our Constitution.  In the Bill of rights religious liberty is enshrined because government is prohibited from making a law “respecting an establishment of religion, nor prohibiting the free exercise thereof.”  In this important respect is our constitutional republic similar to a democracy.

However, the Founding Fathers knew that only a moral and religious people would support the constitutional republic with which they had been endowed.  In other words, our religious beliefs and practices, relying heavily on the teachings of Christianity, would be the primary support of our Constitution and the only means in which it could be preserved.  Christian principles form the foundation that supports and enables our

“Let us with caution indulge the supposition that morality can be maintained without religion. Reason and experience both forbid us to expect that national morality can prevail in exclusion of religious principle.”  – George Washington

If we believe that the United States is a democracy we will tend to act as if it were a democracy.  If we believe the United States is a constitutional republic we should act accordingly.  Those who support their constitutional republic are responsible citizens.  They are self-governing. Their beliefs and closely-held principles govern their words and actions.

What do you think?  As America slips into a steep decline because we have abandoned our morality, our decency, our integrity, and acting in good faith and living as responsible citizens, and act instead as if we were ”on our own” with no principles or beliefs to make us self-governing, are we supporting our republic – or tossing it away?