from The Daily Signal

NOTE: This article is important in several ways: 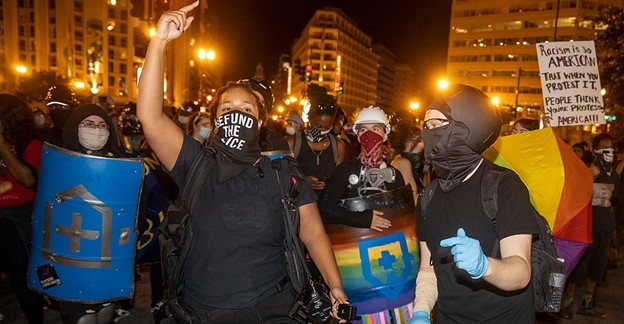 Many of the riots of 2020 were driven by the Marxist ideology of critical race theory rather than an earnest desire to stamp out true racism and repair relations between different groups in America. Pictured: Protesters march on Aug. 30 in Washington, D.C. (Photo: Tasos Katopodis/Getty Images)

Noxious Marxist theories that have festered in academia for decades finally burst out of ivy-covered walls in 2020, invading all aspects of American life. It wasn’t just the cities succumbing to nightly riots—everything from sporting events, to classrooms, to the workplace was hammered with the message that America was never the land of the free.

Even “Jeopardy”—the beloved television quiz show that ratifies when a meme has become an integral part of American culture—had a question in December on The New York Times’ 1619 Project, which claims that “our founding ideals of liberty and equality were false when they were written.”

For this reason, the two of us have written a report for The Heritage Foundation that explains the theories that are the beating heart of what has transpired this year. They are known variously as critical race theory, or critical legal theory, or simply critical theory, or many other new disciplines with the words “critical” or “studies” attached. In some places, such as California, you now have to take a course on one of these areas to graduate from a state university.

It is this worldview that for years has provided ideologues and activists with the blueprint needed to discredit the pursuit of truth, and redefine justice, and even the language to go with it.

Yes, there are racists in America, and they must be met with the full brunt of existing law. In most areas of life, it is illegal to discriminate against individuals or entities because of the race, ethnicity, sex, or national origin of the individual or owners. This is as it should be.

But as we explain in our paper, the perilous events we have just witnessed in the perplexing year of 2020 were not so much a reaction to the hatred in the heart of real racists, but to the mindset that critical theory has created.

In the report we publish today, “Critical Race Theory, The New Intolerance and Its Grip on America,” the two of us trace the history of the family of critical theories, and then explain the impact it has had on real life.

Critical theory, by far the oldest of these schools, can be traced to the 1937 manifesto of the Institute for Social Research in Frankfurt, colloquially known as the Frankfurt School. The school was Marxist from the start, modeling itself on the Moscow-based Marx-Engels Institute. Critical theory also owed a debt to Friedrich Nietzsche’s relativism.

Critical theory amounted to an unremitting attack on Western institutions and norms, in order to replace them with alternatives. But first the norms needed to be torn down. That’s where critical theory—and as we will see all its offshoots—come in.

One of the first of those spinoffs was critical legal theory, which emerged in the United States in the 1970s. Critical legal theory saw the law as simply the “cultural hegemony” codified in statutes and defended by a jurisprudence that aimed to support the powerful against the claims of the marginalized. The critical legal theory movement wanted to overturn the hierarchical structures of modern society.

From there, it was but a short step to critical race theory, which emerges in the late 1970s and the 1980s. It attempts to do exactly the same, but it approaches everything through the prism of race.

To wit, in California, after requiring an ethnic studies course for public college students steeped in the ideas of “decolonization,” “group affirmation,” and “intersectionality,” the state board of education for K-12 schools is now developing an ethnic studies curriculum containing similar ideas.

As of August, the proposed material includes an entire section on “intersectionality,” a concept taken straight from critical race theory and calls on individuals to associate themselves with multiple groups according to gender or race, for example, thereby amplifying their claims to victimhood. We cite other examples in Washington state and Ohio, to name just a few, in our new report.

In higher education, the seeds of critical race theory have borne fruit—notice what students say when they shout down speakers or occupy buildings on campuses today. Here again, terms like “decolonization” and “disrupting institutional hierarchies,” transcribed from student comments during riots in Columbia and in open letters from other universities, decry the seemingly oppressive conditions on haute campuses at some of the world’s most expensive colleges are straight from critical race theory ’s lexicon.

Protecting free speech on campus is an important policy issue, but recognizing that critical race theory as a worldview has resulted in student attitudes leading to the censorship of ideas is a problem for everyone because these are future employees in your places of work.

Diversity trainings that criticize capitalism are big business today. The school board in Fairfax County, Virginia, may have called for more taxpayer money to deal with pandemic-related instructional expenses in April, but they found enough resources in August to pay author and diversity expert Ibram X. Kendi $300 per minute for a video training session for staff, according to local news.

Examples of critical race theory ’s implementation abound. While no nation, not even America, is perfect, as Abraham Lincoln said in his address to the Young Men’s Lyceum of Springfield in 1838, “There is no grievance that is a fit object of redress by mob law.” We must restore the “temple of liberty… with other pillars, hewn from the solid quarry of sober reason.” Our generation, and every generation must “let the proud fabric of freedom rest” upon the ideas of liberty, “a reverence for the constitution and laws,” and the pursuit of a civil society that offers freedom and opportunity to all Americans, regardless of the color of their skin.

Critical race theory has nothing to say to uplift us in this manner. We wrote our paper so that our policymakers and all Americans can better understand the genesis of the events that shook our own “Summer of Hate” this year and are injecting the haunt of guilt—not opportunity—into every sector of our lives.