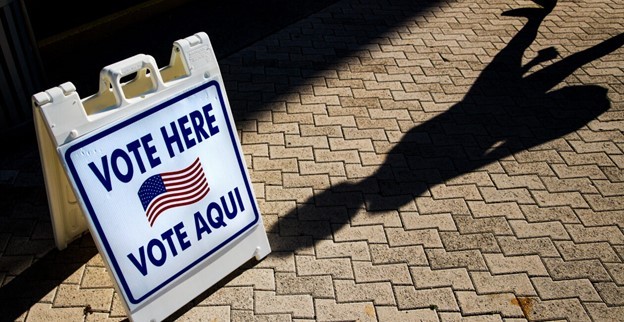 In a new report, "Critical Condition," the Public Interest Legal Foundation refutes claims of many on the left and in the mainstream media that vote fraud nationwide is negligible. (Photo: Scott McIntyre/Bloomberg Creative/Getty Images)

Hans von Spakovsky is an authority on a wide range of issues—including civil rights, civil justice, the First Amendment, immigration, the rule of law and government reform—as a senior legal fellow in The Heritage Foundation’s Edwin Meese III Center for Legal and Judicial Studies and manager of the think tank’s Election Law Reform Initiative.

Kaitlynn Samalis-Aldrich is a research assistant in the Meese Center for Judicial and Legal Studies at The Heritage Foundation.

One of the constant refrains from those who oppose election reforms designed to protect the security and integrity of the voting process is that serious vote fraud is a myth.

But as a shocking new report from the Public Interest Legal Foundation shows, those naysayers could not be more wrong.

The foundation’s report, “Critical Condition,” highlights the severity of the problem: inaccurate voter rolls, duplicate registrations, dead voters, and incomplete registrations—all of which allow fraud by those willing to exploit vulnerabilities in the system.

The foundation discovered more than 140,000 instances of potential election fraud in the 2016 and 2018 elections, ranging from individuals illegally voting in multiple states to someone voting in the name of a deceased person.

The Public Interest Legal Foundation created the type of database that President Donald Trump’s Presidential Advisory Commission on Election Integrity wanted to create, but was prevented from doing so by numerous frivolous lawsuits filed by the left.

Many state governors and election officials also refused to provide data to the commission, which is why it was shut down before it could even do any research.

The foundation obtained voter registration and voter history data from 42 states. It had to sue three states—Illinois, Maine, and Maryland—to get what is supposed to be public information after they refused to comply with their own laws.

All of this information was put into the Safeguarding America’s Votes and Elections database. It was then supplemented with information from other commercial and government data sources, such as credit agencies, obituaries, and the Social Security Death Index.

By supplementing the voter registration information, the Public Interest Legal Foundation was able to sift out as many “false positives” as possible.

By leveraging other identifying information, such as commercial data, Social Security numbers, and credit address histories, one can eliminate most, if not all, false positives that have plagued prior reports from other entities.

The foundation now has what it says is “the best platform ever constructed to analyze the health of voter rolls and catalog potential vote fraud vulnerabilities.”

So, what did the Public Interest Legal Foundation uncover?

There are currently 349,773 deceased registrants on the voter rolls in 41 states. The worst states in this regard are Michigan, Florida, New York, Texas, and California, which account for roughly 51% of the dead voters who are still mistakenly registered.

Even worse, state records show that 7,890 of these deceased voters cast ballots from the grave in the 2016 presidential election and 6,718 did so in the 2018 congressional elections.

If that weren’t bad enough, the foundation also found that:

— 8,360 individuals registered and voted in two different states during the 2018 election.

— 43,760 individuals were registered more than once at the same address and cast second votes in the 2016 election, while 37,889 individuals appeared to have voted twice from the same registration address in 2018. (Thousands of these apparent double votes were exclusively mail-in ballots.)

That last problem—registering at a commercial address—is a serious issue. In fact, Rep. Steve Watkins, R-Kan., was charged with election fraud in July for claiming a UPS store as his residence when he registered to vote, and then voting in a 2019 municipal election in Topeka, Kansas.

The Heritage Election Fraud Database of almost 1,300 proven cases of fraud is just a sampling and not a comprehensive list of election fraud cases. As we note, it “does not capture reported instances that are not investigated or prosecuted.” Those reported cases are likely just the tip of the iceberg.

As the Public Interest Legal Foundation’s report shows, there are 144,117 other potential cases of election fraud, just from the last two federal elections. These should be investigated by election officials and prosecuted by law enforcement officials if the information it uncovered is correct.

Downplaying the risks and vulnerabilities for fraud in the current system only exacerbates existing problems and compromises the most sacred right a free people have.

As the Heritage Election Fraud Database and the latest Public Interest Legal Foundation report show, the threat of vote fraud is real—and it could make a difference in a close election.

Editor’s note: Hans von Spakovsky serves on the board of the Public Interest Legal Foundation.