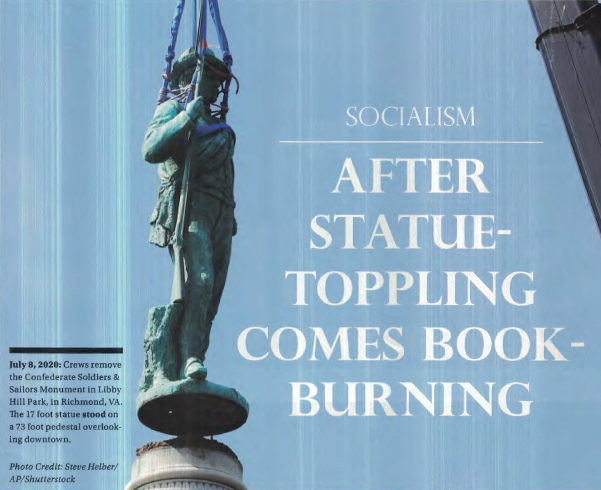 by Robert B. Charles

In 1953, science fiction writer Ray Bradbury released Fahrenheit 451. The book was a hit – and scary. The story describes a society determined to erase history, intent on burning books. Fahrenheit 451 is the temperature at which paper burns. The author’s fear at that time was that America might someday tip that way. Although Bradbury is no longer alive, one wonders what he would say about where we are today.

What Americans must remember is that our world is real and at risk. As socialism spreads, our country is under attack from within. Socialism in all forms is anti-freedom and anti-American, and it poses a threat to our way of life. The Soviets, Chinese, and Nazis all sought to erase history and accompanied their statute-toppling and church-burning with mob mayhem, intimidation, coercion, killing, and book-burning.

Some people believe that change will not come to America, or that a state’s progression from free to coerced, socialist, or fascist is slow. They may doubt that any society would make such a radical turn, but history is our teacher.

Venezuela was once a prosperous country. In 1989, during an economic downturn, riots erupted. By 1992, after a presidential impeachment and two coup attempts, instability reigned. Running as a socialist in 1998, coup-plotter Hugo Chavez won the presidency. By 2004, Venezuela was communist: a new constitution forced on the country, fresh relations with communist Cuba, nationalized industries, currency controls, confiscated property, blanketed welfare programs, and blacklisting of political foes, which led to widespread suppression of opposition. Today, the country is in shambles.

Russia fell to Soviet dominance fast - it was over in six years (1917 to 1923), foreshadowed by events in 1905. The people of Soviet Russia and contiguous countries suffered tens of millions of deaths from communism, only escaping 70 years later with the help of an American president named Reagan, a British Prime Minister named Thatcher, and a Polish Pope named John Paul II.

In Soviet Russia, after destroying pre-revolutionary statues, churches, and culture, Soviets burned books, then killed those found with such material, causing citizens to burn their own books before the Soviets could find them.

Communist China has centralized power, imposed a national security law on Hong Kong, ramped up its cyberattacks, and expanded surveillance and military power projection. In a frightening return to the past, Xi Jinping’s China has again been burning books: a directive issued in October 2019 burned all books critical of communism in all school libraries in the country.

In reality, as in fiction, extreme behaviors occur. Flourishing societies never imagine facing this, but then they do. Relatively free, they are accosted by disintegrating rule of law, street mobs, anarchists, socialist, and communists. The last hundred years are rich with this human tragedy.

That is why respect for history – good, bad, and ugly – is the hallmark of freedom-loving, life-loving, law-abiding societies, essential to a free republic. Destroying statues, names, descriptions, and books is mob riot. It is anarchy, and worse – socialism, communism, and fascism.

That is why at the turn of June’s peaceful anti-racial protest into rolling mob violence, church burnings, and “hammer and sickle” graffiti on World War II cemeteries is highly disturbing. The basis for any democratic republic is rule of law, non-violent interactions, ordered liberty, and respect for history and property.

When we lose that respect, when lawlessness overruns law enforcement and public ignorance permits derision of police, bad things lie ahead unless corrected. Put differently, anyone who pushes violence as a means for changing republican government is out of step with America. Anyone who does not stand up to lawlessness – whether a mayor, governor, representative, or senator – is out of step.

The next step after tearing down statues is violence against buildings, books, and people. That is why actions to preserve the rule of law are essential now. Ray Bradbury wrote about it, history teaches it, and we should be attentive to the need for it. Support for freedom, rule of law, and enforcement is the defense against anarchy, socialism, communism, and hybrid fascism, even redefined as “social justice.”

Violence is not how democratic societies work, nor society-enhancing reform. The way forward is tolerance for peaceful opinions and debating the merits, not intimidation, “cancel culture,” and riots. We should review police tactics, but we cannot default to society-wide violence or justify it.

A final story makes the point. While studying politics and economics at Oxford, I met up with a conservative economics colleague in the library. He was reading Karl Marx’s Communist Manifesto. “What are you doing?” I asked. “Oh, I read Marx every year, just to recall why I believe what I believe.” Lovely, even inspiring.

The point was simple: reach out to understand what you may disagree with, as the result is always positive. You learn something you did not know or have forgotten; you reaffirm what you believe; you may even persuade others. That is what learning is about, and civil society depends on it.

Violent anarchists, socialists, communists, and fascists do not spend much time reading, let alone on conservative thought. I am sure Antifa has not recently brushed up on Reagan, Edmund Burke, or Russell Kirk. That is one way to distinguish them. They want to upend society, violently end it, get their way, then impose it on a free society. They are not interested in books, except for burning.

That is why we do not topple statues or burn books. Preserving history and ideas with which we disagree is how we inform ourselves and future generations of why we believe. That is how we learn what is indefensible or not worth retrying, what offends, disturbs, deprives, and depresses. It is also how we learn what is solid and good, what worked, uplifted, inspired, and improved life.

Truth, not suppression of it, is the goal. History is about remembering truth accurately: the heroic and despotic, the noble and ignoble. History is proof of individual rights, rule of law, Adam Smith’s “invisible hand” allowing upward mobility, John Locke’s idea that with security we work, save, and invest.

History is about understanding and teaching what failed, without compromise and shading, without pretending it worked. Communism’s eye-popping destruction and human horrors, in places like the former Soviet Union, Eastern Europe under Soviet domination, Cuba, Laos, Venezuela, and China – all examples of how not to govern, and how to suppress individual rights.

Applied to our moment, Ray Bradbury’s famous Fahrenheit 451 is a cautionary tale. Beyond destroying statues, defacing noble leaders, debasing intellectuals, and erasing history, his dystopian world is the modern Left’s dream. We must never let it come to pass. That is what Bradbury would say.

Robert B. Charles served in the Reagan and Bush 41 White Houses, as assistant Secretary of State under Colin Powell, and counsel to the U.S. House National Security Subcommittee for five years; a former litigator, he taught law at Harvard University’s Extension School, recently authored  “Eagles and Evergreens” (2018), and consults in Washington, DC.